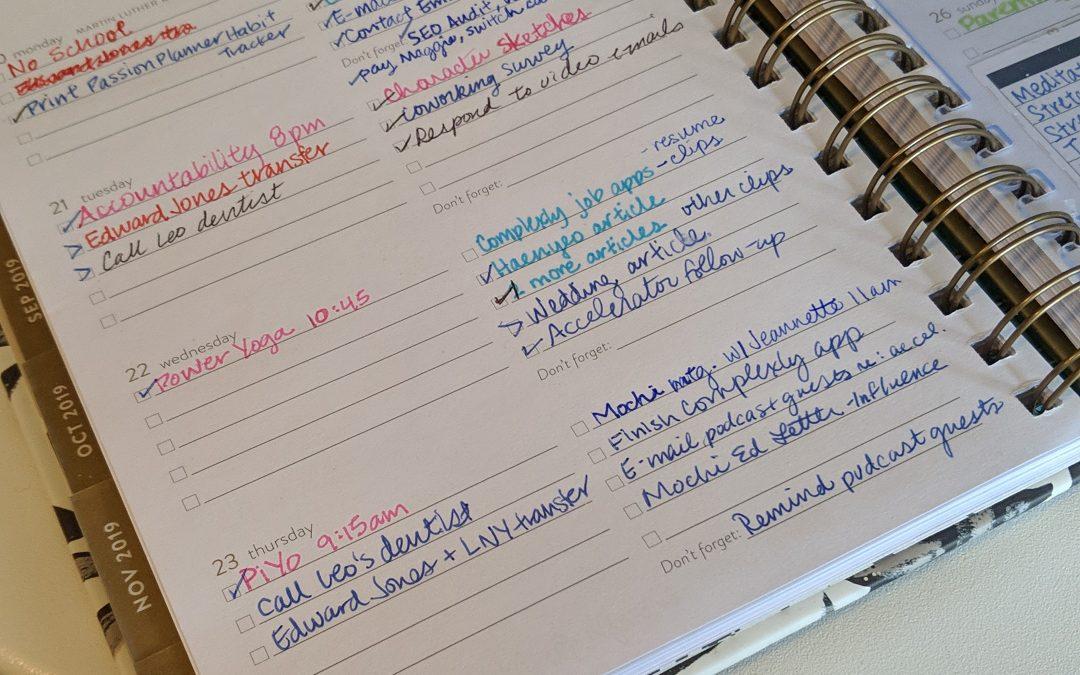 I’m squarely in my post-period power week (people with ovaries, ask me about it, it’s great!) so I’ve been a bit of a task-list devouring beast-o-tron. Here are three quick focus hacks I’ve been using with pretty good results.

I use a paper planner for tracking daily to-do’s. Following the advice of my podcast guest Nikki Soohoo (and the original bullet journal methodology), I’ve started rewriting unfinished tasks onto a later day. Doing this bounces the task back to the top of my attention. It also prompts me to reevaluate whether a task is still worth my time. (I mean, there’s a reason it didn’t get done sooner, right?)

Did you know that push notifications were originally designed to help us use our phones less? The idea was that if you knew you’d get an alert whenever an email or text came in, you’d feel less compelled to check your phone constantly to see if you’d gotten something. Of course, once the marketers got hold of it, push notifications are just…way too pushy.

So I tried turning off almost everything except text messages and phone calls, with mixed results. I certainly didn’t miss the endless stream of app notifications or even my email. But I did get fidgety with real-time messaging apps I use a lot like Hangouts and Messenger. During ongoing conversations, I found myself checking for new messages more often than I otherwise would have. So play with it and see what works for you.

Tracking my overall phone use

You can’t change habits you’re not aware of. I discovered a built-in app on my phone called Digital Wellbeing that tracks how much time I spend on different apps. Ironic, sure. But actually incredibly helpful!

I am nothing if not a sucker for gamification in general, which is maybe how my phone took over my life in the first place. But seeing undeniable proof of the 3 hours a day I dropped into my phone was huge wakeup call. (Also ironic because actual phone calls take up the least amount of time.) There are other phone tracker apps that leave a perma-notification about how much time you’ve used, as well as apps that put a giant countdown clock on your home screen, but I found the latter just a little too stressful.

I’m still on the computer for much of my workday. But actively curbing my often mindless phone use has improved my overall focus.

Now I don’t believe in being efficient for the sake of being efficient. When I go down that rabbit hole, I just find some other less than ideal habit to fill the time. Instead, I mapped out the projects and habits I want to commit to this year and realized I needed to clear some more time and energy for them.

So if your goal is to “be more productive,” remember to think about how you’ll fill that time instead of mindless scrolling.